Julie has danced her whole life, and taught at her own dance school for over 30 years. When she developed Alzheimer’s, however, she had a harder time teaching and staying active in the way she always loved. Her husband, Peter, has supported her as they’ve adjusted to how life is changing. Together, they’ve taken up running, which allows them to both stay active and socialise with the wider community.

Each day is different, and some trying days and some, some not so trying but it’s a difficult thing to deal with. 3 years ago, in September, Julie was diagnosed with Alzheimer’s, right. You know to be fair, a bit of a blow, really in one so young, but Julie being the fighter that she is, is prepared to do everything and anything to try and, well you can’t fight it totally, but to slow it down or to help in any way she can. Julie were a dancing instructor, had her own school for 37 years. Thousands, and I mean thousands of pupils have passed through Julie’s school over the years. So if we go to town or anything, Julie can’t walk through without everybody saying “Oh there’s Julie”. I can’t deny that you know, it was a blow to have to stop. But we’ve seeking you know something else and we found it in this running game. It’s a great leveller, there’s no agenda, everybody is equal in the running gear, and I would say, that if you asked most of the runners, I don’t think any one of them would know that Julie has a condition. We found that a great help. Julie, loves the feeling of that energy burst in achieving something again. JULIE “ and I like to get into it”. And she’s giving it her heart and soul like she does with everything and it’s great. It’s great. A little bit of Julie’s mojo has come back since she’s started running. JULIE “I have gone up there since then, I can’t go around and say oh no I’m not bothered, oh well it doesn’t matter about that, its motivation all the time.” Anybody watching this, and it motivates them to do some activity that they previously hadn’t done, then for goodness sake, go and do it, because that feeling of fresh air, and activity and a bit of a buzz can certainly help, definitely.

How Julie Gets Moving

Julie and Peter have taken up running with a running club in their local community. They started by using a couch to 5K app, which helped them build up to the jogs they do today. The running provides both of them with a way to keep moving and has also linked them up with new friends, providing additional support.

Here are some resources related to Julie’s story about moving more: 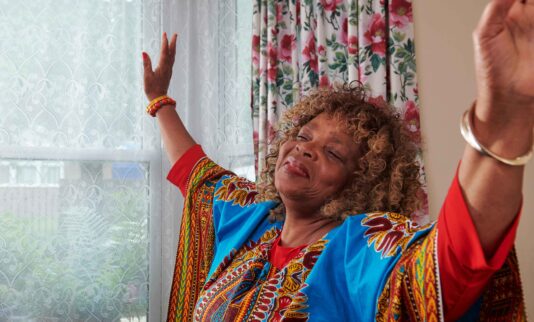 Digital tools to help you move

Learn about the many online resources – including those that are free – that can help you move more in a way that works for you.