Football has always been a part of Chris’ life, but that hasn’t always been easy. Growing up, he struggled with isolation and the stigma of managing his Type 1 Diabetes, both in general and when it comes to being active. His love of the game and all that comes with it, including the friendships, has motivated him to continue planning around his Type 1 and to spread awareness about moving more with a health condition.

Playing football and playing futsal is such a positive thing, it helps me switch off. You know it gives me 45 minutes an hour, a 90 minute game where I don’t have to think about what living with type one is about. It’s quite an emotional place for me to think back to it cause it’s a life changing event. Because from that moment onwards I was different to everybody else that I was around. I knew nobody else that had the same condition as me. Everybody looks at you, and thinks there’s nothing wrong with you. But it affected my identity and the fact that I didn’t really choose to be associated with my condition. When you’re hiding it you are less inclined to do the right things for your treatment and the right things for your condition. For a period of time in my life I managed it, because you chose to hid it so much to fit in with your peers, with children, with teenagers as you grow up. It’s meant my identities flicked between feeling you know really identifying with the fact that I live with type one diabetes and then forgetting about it and being you know trying to being part-time footballer or futsal player, you know whatever you call it. I went over to Portugal in 2017 and I saw their own diabetes futsal team that they had started and it was something that I wanted to replicate a team that only lived with type one diabetes here in the UK. I remember when we first started the team, the very first training session, nobody knew each other. Literally nothing. They had travelled all over the country to come to this session. You know we’ve reached out to people on social media and they’ve turned up, not knowing anybody and by the end of it, we’re talking 3 hours later, literally like a band of brothers. Because they felt comfortable in the environment that we’ve created, the openness of talking about the condition, sharing it, people doing injections in front of each other, people blood glucose testing in front of each other, it’s an environment settled for people with the condition. I’ve seen some of the change completely the way they manage the condition, like some of them have changed their whole regime on the back of advice that somebody has given them within our team. It’s for the very first time a situation where they all feel that they can do the things that they’ve been hiding for years, and then by the end of it, they’ve both got to come to the fact that they love football and futsal and they’ve got this condition that’s challenging. Harbouring that environment has been probably one of the best things that I’ve ever achieved.

How Chris Gets Moving

Chris spends a lot of his time playing football and futsal, and started the UK’s first team made up entirely of people with Type 1 Diabetes. One of the things he enjoys most about it is the community and connection he and his teammates share, and how much they can support each other.

Here are some resources related to Chris’s story about moving more: 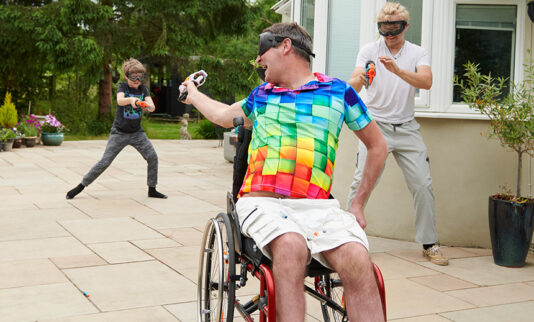 Explore how you can safely get moving with friends, family, and more, plus some of the mental health and social benefits that can come with it.